Lindsay Lohan will reportedly shoot a nude photo spread for Playboy for a payday of nearly $1 million. 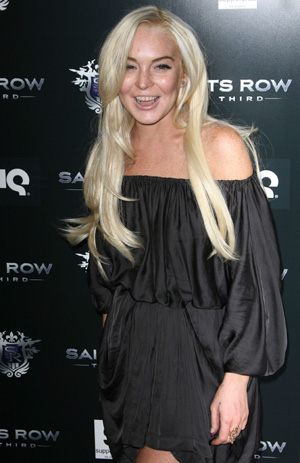 Lindsay Lohan is shooting nude photos for Playboy magazine — and is earning a pretty penny to do it, says TMZ. The actress was offered $750,000 to pose naked in the magazine, but refused saying she wanted $1 million dollars.

Hugh Hefner got close to her asking price and the deal is done. In fact, she reportedly started the nude photo shoot this past weekend. Perhaps that was why she was late to morgue duty?

Before you get too excited, other sources are reporting that the photo shoot is “non-nude” and is slated for the January issue of Playboy.

Her publicist can “neither confirm nor deny at this time” the Playboy rumors, however you can count on her previously yellow and chipped teeth to be pearly white after a trip to the dentist. “How do u manage to get and eye abrasion from [the] dentist’s office,” she tweeted.

Lohan joins a long list of celebrities who have posed for Playboy, including Brooke Burke and Kim Kardashian, who said she did it because she has always been such a “straight arrow.”

“It was an independence thing for me. I was always by the book, such the straight arrow when it came to pleasing my parents and being a good daughter,” Kim said.

No word yet on what played into Lohan’s decision to pose nude for Playboy or what parents Michael and Dina Lohan think, but the $1 million payday undoubtedly helped. Lohan has struggled to find work as an actress after the troubled star has been in and out of court and rehab the last couple of years.