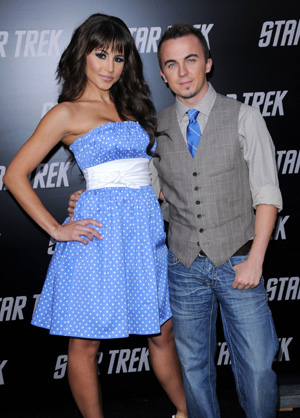 Frankie Muniz and his girlfriend of four years, publicist Elycia Marie Turnbow, have had a somewhat rocky relationship in the past, but they have apparently worked things out and are ready to take the next step.

“After 4 years together, I’m so happy to be ENGAGED to the love of my life @ElyciaMarie!!!” Muniz, 25, tweeted. He followed up with a series of tweets with the word fiancée, including, “Playing frisbee in the park with my fiancee and our dogs… so Hallmark card worthy.”

The Malcolm in the Middle star called police to come to his Phoenix, AZ home after a domestic argument with Turnbow this February. He had said they were fighting over “prior relationships” and Turnbow was “throwing things and hitting [him].”

The police report said that Turnbow “showed signs and symptoms of drinking alcohol,” however she said that Muniz “punched her in the back of the head” and that during the fight he had put a gun to his head “possibly with [the] intent of committing suicide.”

When asked by police if he had hit Turnbow, Muniz said, “No. I love her too much. She is the woman I want to marry.”

His rep said that Muniz was “not suicidal” and that the “gun played no part in the argument and was voluntarily given to the police for safekeeping.”

It sounds like the couple has worked out their issues — Us Weekly is reporting that the couple is wasting no time in tying the knot as their wedding is “set to take place in six months” and will include a star-studded guest list to include the Jonas Brothers.