Get a sneak peek of Angelina Jolie’s directorial debut, In the Land of Blood and Honey. Watch the trailer here! 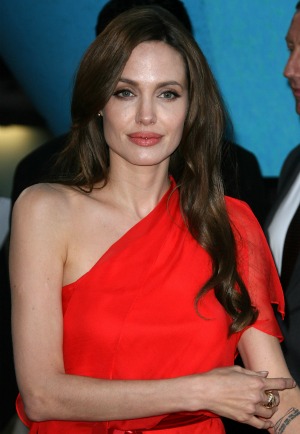 Angelina Jolie has much more on her plate than looking gorgeous, raising six kids and smooching Brad Pitt: The actress will soon make her directorial debut.

In the Land of Blood and Honey marks Jolie’s first foray behind the camera, and it is the kind of film you would have expected the now-family-friendly 30-something to have made during her Goth era: Dark, brooding and violent.

“Set against the backdrop of the Bosnian War that tore the Balkan region apart in the 1990s, In the Land of Blood and Honey tells the story of Danijel (Goran Kosti?) and Ajla (Zana Marjanovi?), two people from different sides of a brutal ethnic conflict. Danijel, a soldier fighting for the Serbs, and Ajla, a Bosnian held captive in the camp he oversees, knew each other before the war, and could have found love with each other. But as the armed conflict takes hold of their lives, their relationship grows darker, their motives and connection to one another ambiguous, their allegiances uncertain. In the Land of Blood and Honey portrays the incredible emotional, moral and physical toll that the war exerts both on individuals and people as a whole, and the terrible consequences that stem from the lack of political will to intervene in a society stricken with conflict.”

Watch the trailer for In the Land of Blood and Honey:

Jolie, who also produced and wrote the film, said the project left her feeling “exposed” and she didn’t trust anyone else to tell the story as the director.

“I’ve never felt more exposed. My whole career, I’ve hidden behind other people’s words,” she said in the October issue of Vanity Fair. “Now it’s me talking. You feel ridiculous when you get something wrong.”

“It was something I didn’t trust out of my hands,” she explained. “So by default I ended up putting myself in as director.”

In the Land of Blood and Honey opens in theaters everywhere on Dec. 23.