Robert Pattinson says he had to work hard to look as good as Taylor Lautner in The Twilight Saga: Breaking Dawn Part 1. 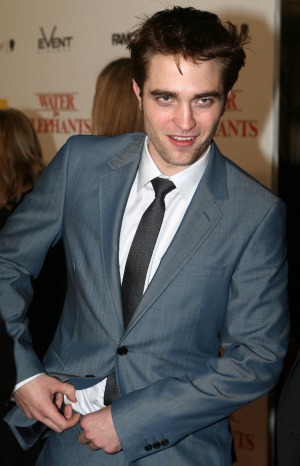 It’s the moment Twihards everywhere have been waiting for: Edward and Bella are finally on their honeymoon and gettin’ it on. What was Robert Pattinson‘s biggest fear leading up to his big day in the sack with Kristen Stewart? Not looking as good as Taylor Lautner with his shirt off!

“You also have to worry about how you’re going to look,” Pattinson told Mexican magazine 15a20. “I had never been so worried about that before, but after seeing how much Taylor [Lautner] works out for the movies, I thought, ‘Well, everybody is really going to judge me now.’ I always tried to think about positions where I could tense the muscles, and suck in my belly. I think I just gave the most vain answer I could come up with.”

Pattinson hit the gym hard to get a sculpted physique. “In this movie, I thought, ‘Okay, it’s the last one, I’m getting a six pack,’ and I tried, but it’s very hard,” he said. “I worked out so hard for six months, so after filming the sex scene, the first thing I thought was, ‘Time to eat!'”

But it isn’t his body that makes the star the most paranoid — it’s keeping up the tremendous momentum of his career.

“I feel like if I don’t keep making movies, everything will be over quickly and I’ll have a mental breakdown,” he said.