The Dancing with the Stars ballroom was missing Mr. Personality (a.k.a. Carson Kressley) this week, but things still got off to a fun start with Broadway night. Okay, Carson did make a small appearance, but we still wanted more! 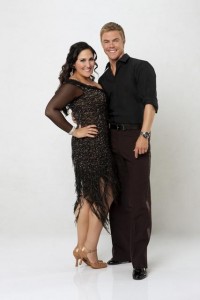 Last week, the Dancing with the Stars audience erupted into boos when Carson Kressley was eliminated, but the show must go on — Broadway-style!

With seven contestants left racing for the mirrorball trophy, Dancing with the Stars turned its contestants into Broadway babies this week.

Not only did the contestants battle Broadway, they also took on the group dance.

Julianne Hough shook her caboose to footloose on DWTS >>

Are you ready for jazz hands and show tunes? Here’s how the competition stacked up…

Rob and Cheryl (22/30): This week, Rob Kardashian danced like a man to the Jersey Boys song “Walk Like a Man.”

Cheryl Burke beat the cha cha into Rob’s brain, but he didn’t look as comfortable shaking his hips to the rhythm this week. Len Goodman said it was “clean” and “had good timing” but agreed he was missing the rhythm.

Nancy and Tristan (24/30): Nancy Grace and Tristan MacManus danced the fox trot to Spamalot’s “Always Look On the Bright Of Life” and it was a nice balance of theme and dance.

Bruno Tonioli called her “Nancy Dancelot” and Carrie Ann Inaba said it was a “showstopper.”

Grumpy Len found fault in a small part of the routine he didn’t think was up to fox trot standards. Regardless, she got her first nine of the season.

David and Kym (23/30): David Arquette and Kym Johnson were so much fun this week, with their energizing quickstep to “We Go Together” from Grease — but “fun” and “energetic” is where the compliments end.

It was a fun, fast, high energy dance that at times lacked synchronization. Len said it was “rough around the edges,” but “fun.”

Ricki and Derek (29/30): Ricki Lake and Derek Hough danced a magnificent quickstep to “Luck Be a Lady.” She was exciting, fast and managed to keep the technique in check.

Bruno said it had “impeccable style,” which means Rick Lake is back on top.

Chaz and Lacey (19/30): Chaz Bono and Lacey Schwimmer got their dance on with a Phantom of the Opera-inspired Tango. Yes, he wore a mask and she wore big ball gown.

It was dramatic, and for Chaz, aggressive, which is something he’s lacked in the past.

Now, not all the judges were in agreement with us. Carrie Ann was on our wave length, but Bruno and Len were not. The point is, he did have much more focus, he’s just never going to have the same power as the other dancers.

Hope and Maks (20/30): We begged for Hope Solo not to dance anymore sexy dances and what happened? She got the rumba. She just can’t tune into her sexy side — no matter how much she tries.

There was a disconnect and lack of technicality that was obvious to Len and Carrie Ann. The audience liked the performance, but in terms of dance it was not that great and Maks Chmerkovskiy took on the judges for their “little” comments.

We were wondering when Maks was going to lose it.

Here’s why we liked their quickstep better than Ricki and Derek’s: The couples were matched in technique but J.R.’s had more personality. Their scores may have tied them on the leader board, but we know who was really better.

We’re not even going to tell you why it was better than Chaz’s quickstep — that’s obvious.

“Big Spender” and “Money” was the medley chosen for the group dance. The best part? The ladies had to act like prostitutes! Too funny!

Carson Kressley was brought into the rehearsals to give some Broadway tips but it was up to the contestants to standout, which didn’t matter because they didn’t get a score for it — just judges’ comments.

What did you think of this week’s Dancing with the Stars? Did you like Broadway week?