Ben Affleck and Matt Damon are teaming up again for the first time in 14 years to tell their story of fugitive Whitey Bulger.

It has been a long time coming, but the reunion film fans have been waiting for has finally arrived! Ben Affleck and Matt Damon will work together once again to tell the story of South Boston fugitive Whitey Bulger. 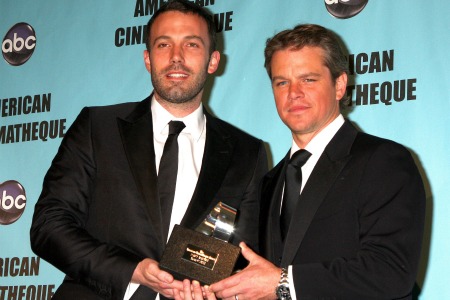 Affleck and Damon famously began their on-screen partnership in the Oscar-winning film, Good Will Hunting, where both were honored with Golden Globes and Academy Awards for Best Original Screenplay in 1997.

A representative for Damon confirmed that the actor will indeed portray Bulger. In addition to directing duties, Affleck will also star in the motion picture. His brother Casey Affleck, who also starred in Hunting, will appear in the film. Boardwalk Empire creator and writer Terence Winter will write the script.

Said Affleck to Deadline.com, “Matt and I have been looking for something to do together for some time. We’ve heard about Whitey Bulger since we were kids, and we are excited by the prospect of putting it on the screen.”

Greg Silverman, Warner Bros. Pictures president of production, stated to Deadline.com, “It’s a perfect fit of story with the ideal artists to bring that story to the screen, and it’s so great to be heading back to Boston with Ben and Matt.”

The story of Whitey Bulger is one of a notorious South Boston crime boss who fled the city and lived as a fugitive for sixteen years. He spent twelve of those on the FBI’s Most Wanted List. Bulger was arrested in June of this year in Santa Monica, California.

Reportedly, the film will detail from Bulger’s childhood through to his incarceration in Alcatraz, as well as his rise to mob don, all the while secretly working as an FBI informant.