The newest addition to the action movie genre, Justin Timberlake, tells SheKnows why he loved playing the “everyday hero” in In Time.

“Variety is the spice of life,” Justin told SheKnows while promoting his new sci-fi flick In Time.

So when he got the opportunity to try out the role of the action hero, a previously unfulfilled childhood dream, he jumped at the chance.

“It’s the first character that I’ve looked at and took on the role just because I admired him,” said Justin. “It’s like every boyhood fantasy I’ve ever had… shooting guns, flipping cars, and kicking guys asses. And you know, making out with a hot girl. Not in that order of importance, but having it all in the same movie.”

Video: Amanda Seyfried tells us what it was like kissing JT >>

Timberlake said he’s always liked the concept of an average guy fighting against the odds.

“It’s how I hope I would respond to having my back against the wall,” he told SheKnows. “The concept itself is provocative, to have this other world that exists, and to have a really everyday man inside of that world, just kind of staying alive.” 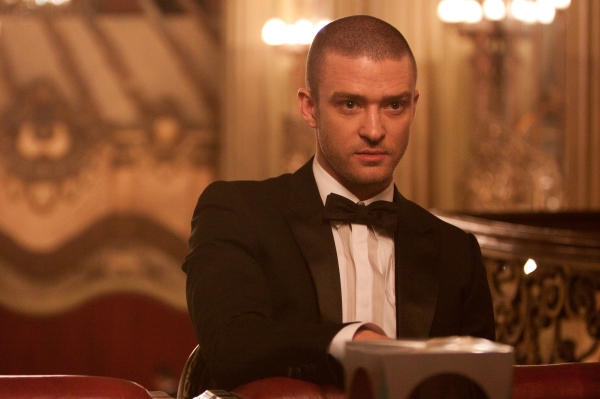 When questioned what he would do with one day to live, like the characters in In Time, Justin’s desires were simple.

“I’d play golf,” he said. “I’d eat. I like to eat a lot. I’d hang out with my family. Playing this role definitely made you think more about that type of experience. You should be appreciative of the time that you do have.”

And now that the movie is out, Justin said he’s going to spend his time doing just that.

“For the rest of the year, I’ll have a snowboard strapped to my feet,” he told SheKnows. “I’ll be vacationing, taking a break.”

Bet he’ll be spending some time with on-again girlfriend Jessica Biel as well!