Kim Kardashian will star in Tyler Perry’s upcoming flick about a marriage counselor whose own marriage is on the rocks. 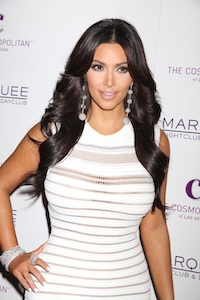 What could be more fitting amid rumors that Kim Kardashian‘s marriage is falling apart? How about a major supporting role in a movie about marital woes — a part which Kim Kardashian has officially landed. Kim confirmed the news herself via Twitter, shouting out: “Big News!! I’m co-starring in Tyler Perry‘s new movie!”

The movie was written by Perry and centers on Judith, a marriage counselor with an Ivy-league education whose seemingly blissful marriage has her bored to tears. Judith (played by 25-year-old Jurnee Smollett) ends up cheating on her husband with a client (yikes!) and turns to Kim’s character, Ava, for help. Ava helps Judith revamp her look, style, and attitude with a major makeover all while providing heartfelt advice along the way. We somehow don’t think the role was a stretch for Kardashian.

This career move is a big one for Kim Kardashian as she has little acting experience unless you count reality television. Her first role was in Disaster Movie (2008) and she appeared on four episodes of the Canadian series Beyond the Break (2009). Recently, she played a single-episode character on CSI: NY (2009).

Kim received the news of her major movie role on her birthday as she celebrated with husband Kris Humphries in Las Vegas. While the pair appeared to be all smiles at the birthday bash, rumors are still swirling the two are splitting up.

With what is sure to be a hectic shooting schedule as Kim’s tries to seriously break into acting, it’s not clear if Kardashian and Humphries will stay together — especially since he’s been spotted without his wedding ring.