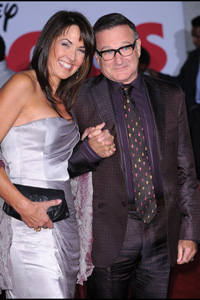 Robin Williams got married for the third time on Sunday to graphic designer Susan Schneider. The 60-year-old Happy Feet star and Schneider tied the knot at the Meadowood Resort in Napa Valley.

Schneider told the San Francisco Chronicle that she was “so excited and so thrilled” to marry Williams. The impressive guest list at the wedding included Steven Spielberg, George Lucas and Billy Crystal.

The Good Will Hunting star has three children from previous marriages, including 28-year-old Zachary, 22-year-old Zelda and 19-year-old Cody. His ex-wife Marsha filed for divorce in 2008, citing irreconcilable differences.

Zelda, who acted in the horror movie Don’t Look Up, said at the time the divorce “wasn’t a complete surprise.”

“I just want my parents to be happy,” she said of Williams and her mother Marsha. “And they did last 18 years — a lot longer than most! It’s never easy to end. [But] there’s no bitterness — we’re all a family.”

Williams met Schneider in 2009 and helped nurse him back to health after he had heart surgery to “replace his aortic valve, repair his mitral valve and correct his irregular heartbeat,” his doctor said. “A couple hours after surgery, he was entertaining the medical team and making us all laugh,” cardiothoracic surgeon A. Marc Gillinov reported.

Now that he is all recovered, his daughter Zelda seemed happy that his father has found new love. “Let the wedding madness begin,” she tweeted this weekend. “The wedding festivities rage on but my tired feet are done. Thank it’s time to lay in the tub, eat M&M’s and write.”