From the dumb blond to the manipulative temptress to the bright-eyed bride, the versatile Amanda Seyfried has shown she can conquer a variety of roles. And as the leading lady of In Time, she’s done it again. See what Seyfried told us about playing a red-headed gunslinger in slingbacks.

With her big blue eyes and loose golden locks, Amanda Seyfried is usually the picture of innocence. But throw a razor-cut red wig and a pair of fierce stilettos on the actress, and she looks downright dangerous.

As the lead actress in In Time, Seyfried shows just how tough she can be.

“Anything different is fun, especially when you are running around with a gun and there are no consequences,” Amanda told SheKnows. “It gives you a feeling of so much power. I really enjoy just being a bad-ass young woman finally. You watch enough movies and guns just seem exciting.”

Another exciting aspect of Amanda’s role was getting to cozy up to her sexy co-star, Justin Timberlake.

“You would like it,” Amanda said, when asked to describe the make-out session. “I think every woman would.” 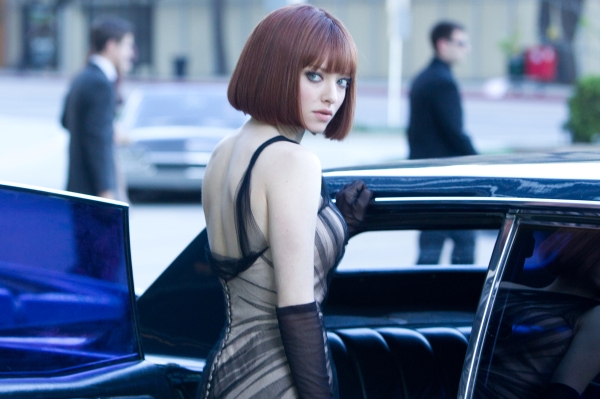 Unfortunately, JT is taken. Reports say he and on-again, off-again girlfriend Jessica Biel are back on. But that didn’t stop Amanda from showing off her impeccable wingwoman skills and talking Justin up as the perfect gentleman.

“He’s a very respectful, intuitive man and in some ways, just the perfect guy for a woman,” she told us. “He treats his mother really well. He’s really funny. He has a lot of humility. He’s just very aware.”

As for Amanda, the 25-year-old supposedly has a new man of her own to focus on — along with some pretty lofty life plans.

When asked what she would do if her time was ticking away, Seyfried told SheKnows, “I think I would just take the people I love and live somewhere else, live somewhere foreign. I would just love to learn another language. Ride as many horses as I could, have as many animals, and have a baby.”

Luckily, it looks like this actress has all the time in the world!