Britney Spears has hit a career low point: Her concert tickets in the UK aren’t selling. 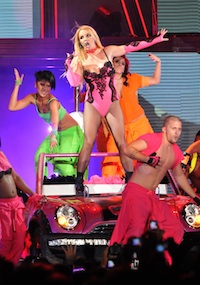 Britney Spears‘ Femme Fatal tour was a major success in the United States as was the album, reaching over a million sales and it was certified platinum in April 2011. While her total record sales — over 32 million — showcase Spears’ longevity as an entertainer, fans in the UK aren’t exactly lining up to see her live.

Concert promoters are shocked since they expected the tour to sell out. Her upcoming show in Birmingham on Oct. 30 has sold only half the tickets (about 8,000 remain). Trying to stimulate sales, ticket prices were cut in half (from $88 to $44), but that has failed to bring any real activity. The next step was to offer a deal through the discount site Groupon, which many have cited as a major sign the ticket sales are even worse than insiders originally thought.

Live Nation was quick to respond to those rumors, saying their relationship with Groupon was strategic and not financially motivated. “Offering a deal on Groupon is not a reflection of the quality or status or sales of a show.” However, the actual deal offered through Groupon does seem to be based, in part, as a larger effort to sell Spears’ tickets (and sell them fast). Groupon’s Femme Fatale ticket sales not only reflect the recently slashed price of $44, but if users buy 10 tickets they receive two free. What would normally cost you over $1,000 will now set you back just over $400.

While it’s noticeable Britney Spears’ ticket sales are way down, what isn’t clear is why. Like the United States, the economy is weak in Britain with high unemployment rates. Yet, some say fans just aren’t interested in seeing the 29-year-old popstar live given her continuous string of lackluster live performances with less-than-great choreography execution.