Ashley Greene is the November cover girl for Flare magazine and she reveals what is next for her after Twilight. 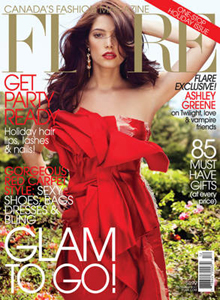 Ashley Greene goes from being a vampire to being totally vamped out on the November cover of Flare magazine. Wearing a red Marchesa gown, she looks gorgeous in the photo that was taken at a private residence in Beverly Hills.

She has played vampire Alice Cullen in the Twilight series since 2008 and already has three of the movies (Twilight, New Moon and Eclipse) under her belt — and will soon be busy promoting The Twilight Saga: Breaking Dawn –Part 1, followed by Breaking Dawn – Part 2 next year.

So, what is next for the 24-year-old actress after the beloved Twilight franchise comes to an end next year?

“Right now I’m just reading a lot [of scripts], trying to figure out what the next move is going to be,” says Greene, who recently broke up with Joe Jonas. “I feel like everyone’s kind of watching and waiting saying ‘What are these kids going to do?’ So I’m just taking full advantage of being able to take things at a very steady pace and figure them out as I go.”

Speaking of Twilight, Greene gave a hint as to what her bridesmaid dress will look like when Edward marries Bella. “I wanted Alice’s past incorporated into her dress a little bit. She’s from the 1920s and 1930s, so we kind of kept that in mind,” she said.

Would she want to have Alice’s cool clairvoyant powers in real life? “It sounds really cool but I think it would drive me crazy, honestly. It kind of takes away the mystery of life a little bit. I think I would just drive myself absolutely insane trying to stop things from happening,” she mused.

She undoubtedly had a hard time narrowing down her favorite red carpet dress, but revealed her top pick. “Prabal Gurung had a red dress that I wore to the New Moon premiere, and it was floor length, a very simple silhouette, had a tiny bit of a train in the back. When I wore that, I think I felt, for the first time, like a movie star.”