Are you ready to scream, cringe, gawk and gag with Joe Rogan? Fear Factor is coming back to primetime and SheKnows has the sneak peek of some of the outrageous new stunts that will test contestants’ might, will and stomachs, starting in December.

A first look at NBC’s Fear Factor has landed and if the returning series is anything like the clip below, both former and new Fear Factor fans are in for adrenaline treats that involve explosions, car crashes, flying humans and underwater thrills, not to mention a taste of scorpions, snakes and bumblebees. For some SheKnows readers, however, it’s the buzz cut that might be the most horrifying of all. 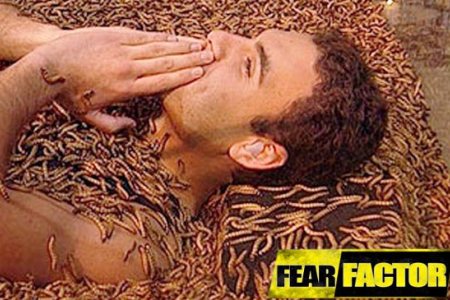 “Fear Factor‘s back, and it’s crazier than ever,” promises Joe Rogan, who once made SheKnows’ Hottest TV show Hosts roundup.

It’s been over five years since Fear Factor fell under the weight of the hefty competition of American Idol and seven years since the show shot its last stunt. But now, Rogan’s back doing what he does best: Consoling, egging on and teasing freaked out contestants as they take on the most frightening, disgusting and horrifying tests imaginable.

“What I brought to Fear Factor the first time I hope to bring to it again — a background in competitive athletics along with being a standup comedian. This show is tailor-made for me,” Rogan said.

Back in the show’s last run from 2001-2006, contestants crawled through a pig-sty, hung from a cargo net dangling from a helicopter while opponents tried to knock them off using fire boat water cannons and raced down a freeway and secured their cars underneath a moving semi-truck before climbing out of the sunroof to traverse the side of the truck.

That’s nothing compared to what can — and will — be done in the Fear Factor reboot, apparently. “The stunt world has evolved significantly, since we taped the last show,” exec producer Matt Kunitz (Wipeout) said. “Technically, stunts now are so much better at what we can do — much bigger falls, much faster falls, bigger explosions, faster car stunts, bigger flips — we want to take it to the next level.”

While adrenaline levels will be raised, the game remains the same. Four teams of two will compete against each another each week, with spouses, family members, co-workers and friends facing their fears together by tackling insane physical stunts, as well as challenges involving creepy crawly animals and other gross fare. The team that makes it to the final challenge and wins takes home a $50,000 prize.