Steve Kroft of CBS’s 60 Minutes sat down with Walter Isaacson to discuss his greatly anticipated authorized biography of the late Steve Jobs.

On Sunday night, CBS’s 60 Minutes profiled Steve Jobs through Walter Isaacon’s new authorized biography of the technology icon, simply titled Steve Jobs. The interview, led by Steve Kroft, covered everything from Jobs’ views on his childhood to the advice he gave President Obama on job creation. Most notably, Isaacson told CBS that Jobs and his family wanted an honest — even if was unflattering at times — portrait of the beloved late Apple founder and CEO. 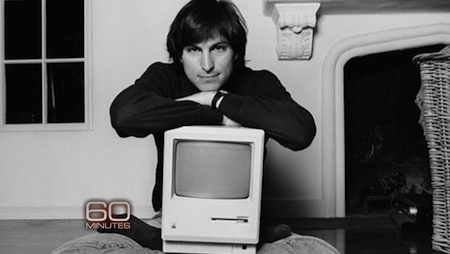 His wife, Laurene Powell, told Isaacson, “Be honest with his failings as well as his strengths. There are parts of his life and personality that are extremely messy. You shouldn’t whitewash it. I’d like to see it all told truthfully.” Jobs echoed his wife’s sentiment, “I have no skeletons in my closet that can’t be allowed out.”

Walter Isaacon told CBS this meant the interview was daunting but kept the family’s wishes.

“He’s not warm and fuzzy…It’s a book that’s fair. I mean, this is a real human being.” When Kroft comments on Jobs’ flaws, Isaacson replies, “He was very brittle. He could be very, very mean to people at times. Whether it was to a waitress in a restaurant, or to a guy who stayed up all night coding, he could just really go at them say, ‘You’re doin’ this all wrong. It’s horrible.’ And you’d say, ‘Why did you do that? Why weren’t you nicer?’ And he’d say, ‘I really wanna be with people who demand perfection. And this is who I am.'”

The writing process began in 2009 and was conducted over 40 personal interviews, many of them recorded and included in the 60 Minutes interview with Isaacson.

Isaacson tells Kroft he believes Jobs was heavily influenced by his adopted father, Paul Jobs. “Paul Jobs was a salt-of-the-earth guy who was a great mechanic. And he taught his son Steve how to make great things. And he — once they were building a fence. And he said, ‘You got to make the back of the fence that nobody will see just as good looking as the front of the fence. Even though nobody will see it, you will know, and that will show that you’re dedicated to making something perfect.'”

You can watch the entire 60 Minutes segment or read the transcripts of last night’s broadcast on CBS’s website. Walter Isaacson’s biography, Steve Jobs, was published by Simon and Schuster, which is a division of CBS.