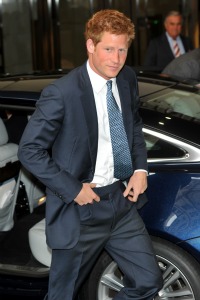 Prince Harry’s trip to America has been rather low-key, at least compared to the trip his big brother Prince William and Kate Middleton took to LA in June. But that doesn’t mean he isn’t having himself a royally good time.

The spare heir, who is in the US to complete his Apache helicopter pilot training, has been spotted several times in San Diego, about two hours from the base where he is receiving his lessons. Now Harry has been tied to a cocktail waitress and a photo shows the pair appearing to kiss!

Now the waitress is in full-blown denial mode — probably because she has a live-in boyfriend.

“Harry is a real-life Prince Charming. He is so sweet. In fact, he was kind of goofy with me,” waitress Jessica Donaldson told The Mirror. “I really like him, but I am speaking out now because I want people to know the truth. I am not sleeping with Prince Harry and he has never been anything other than a total gentleman to me.”

“I am very upset that all this has blown up. He is just a regular guy who enjoys a few beers with his buddies.”

“He’s really cool and down-to-earth and that’s what I liked about him,” said the 26-year-old. “I’m flattered he showed me attention but there is nothing more to it than that.”

Donaldson met the prince at a club where she was working as a bottle girl in the VIP area, and despite that live-in boyfriend of hers, she jumped at the chance when Harry invited her to brunch the next day.

“We hung out, had breakfast, talked and I thought how cool it was to be with an English prince. Harry had scrambled eggs,” she said.

She met up with Prince Harry again later that night at a club in Solana Beach — and that’s where the telling photo was snapped.

Donaldson denies she kissed the prince, and her boyfriend backs her up.

“When I first saw the pictures I talked to her and she assured me nothing went on,” said Brandon Thomason. “She told me they didn’t kiss and I believe her.”

“She said he leaned in to talk to her and it was just the angle of the camera that made it look like a kiss. We both work in the nightclub ­business and you have to trust each other. If I didn’t believe her, I wouldn’t be here now.”

One thing is for sure: Things are going to be a little awkward in the Donaldson-Thomason home for a while.