First Facebook, now the pumpkin patch. Isn’t there any place teen bride Courtney Stodden can be her sexy self without getting booted? 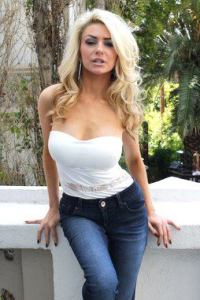 Courtney Stodden and Doug Hutchison are legally married, and despite their 34-year age difference, they are free to get affectionate any place they’d like — so long as it’s not in public!

Courtney Stodden’s pumpkin patch drama is a result of the 17-year-old teen bride’s scantily clad attire and her inappropriate public display of affection with 51-year-old husband Doug Hutchison. The pair were booted from a family pumpkin patch this weekend after onlookers complained of their behavior.

Decked out in shorts that would make Daisy Duke blush and a plaid shirt tied up to show off her stomach, Courtney Stodden drew the ire of the family-friendly pumpkin patch.

Presumably referring to the incident, the teen bride — who has also gone a few rounds over photos too sexy for Facebook — turned to a Bible passage to explain her views on Sunday. “Have a beautifully blessed Sunday!” she tweeted, then quoted, “‘Do not judge by appearances, but judge with right judgment.’ John 7:24.”

Other recent messages from the 17-year-old, who wed with her mother’s permission at age 16, include forays into alliteration such as:

Exotically crawling through such a kittenish day as my saucy senses playfully pounce on every single frisky fantasy that comes my way; Rawr!

Washing my whispering wants in nothing but the wondrous waters of the world. It’s Wet & WILD Wednesday! XOs 😉

The daring deliciousness of the day is delicately dominating my down & dirty demeanor… Rawr! 😉

Though Courtney Stodden is carving out a path to fame not all would desire to be on, the power of her sexy photos and trouble-making isn’t lost on the teen bride. Along with an image of her name topping search engine charts, the soon-to-be reality star writes, “Mmm… I have nothing but LOVE for my haters – Thank you. XOs.”

Do you think the pumpkin patch was right to kick out Doug Hutchison and Courtney Stodden?