Loretta Lynn is at home after a pneumonia scare forced her to cancel some weekend concerts. 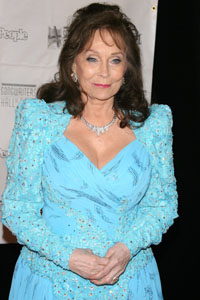 Iconic country singer Loretta Lynn is recuperating after battling a nasty case of pneumonia, according to her rep.

“Around 1:30 AM Saturday morning, Loretta awoke on her tour bus complaining that she was having a hard time breathing,” her team wrote in a website statement. She was taken to a hospital in Bowling Green, Kentucky, and treated for the beginning stages of Bacterial Pneumonia.

The Coal Miner’s Daughter is a fighter, though — she’s already back at her home in Hurricane Hills, Tennessee.

“It was one scary night… But I am feeling better and just gonna take it easy for a couple of weeks,” Lynn said. She had to cancel her weekend shows in North Carolina and Kentucky, though she plans to reschedule. The 76-year-old also plans to hit the road on November 3 for a show in Knoxville, Tennessee.

Her plans to resume touring might seem ambitious to some, but Lynn built her career on breaking free of the ordinary. One of her biggest hits, The Pill, was pretty controversial when it was released in 1975. However, Lynn doesn’t have any regrets about it, or the rest of the songs she’s recording during her career.

“I sure didn’t like it when I got pregnant a few times. It’s hard for a woman to have so many kids. And at the time, I guess I had four. And then I got pregnant and had the twins. But I was a little angry. … If I’d had [the pill] I would have used it. ‘Cause back when I was having all the kids, we didn’t have birth-control pills. Or if we did, I didn’t know anything about them,” Lynn said during a 2010 interview.

Anyone with that much confidence and gusto isn’t going to let something like pneumonia get her down!