SNL alum Will Ferrell is America’s comedy sweetheart. The actor has earned 2011’s Mark Twain Prize for American Humor for his over 15 years of political satire.

TV, film and web star Will Ferrell is one funny man. The actor was recently honored with the nation’s top comedy award, the Mark Twain Prize for American Humor. The 44-year-old received the statue last Sunday at the Kennedy Center for the Performing Arts in front of a who’s who of actors, producers, writers and even politicians. 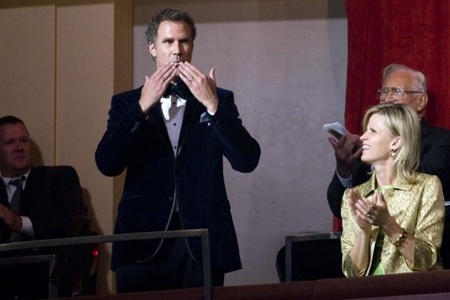 According to the Associated Press, the Mark Twain Award “recognizes people who have followed the tradition of Samuel Clemens, the writer known as Mark Twain who used social commentary and satire to have an impact on society.” Past recipients include Ferrell’s former SNL co-star and writer Tina Fey, Bill Cosby, Steve Martin and Whoopi Goldberg.

Thanks to his background at Saturday Night Live, Ferrell has made a career out of poking fun at some of the biggest names in government, specifically George W. Bush. He took his impersonation from TV to Broadway where he headlined the show You’re Welcome, America: A Final Night with George W. Bush, which was nominated for a Tony Award in 2009.

While Ferrell’s got a long history of political satire, his career consists of much more. Over the past decade he’s starred in both cult favorites and box office hits such as Zoolander, Old School, Elf, Anchorman: The Legend of Ron Burgundy, Wedding Crashers and Talladega Nights: The Ballad of Ricky Bobby. He also co-founded the Webby-winning comedy website Funny or Die in 2007, alongside producing partner and former SNL head writer Adam McKay.

You can watch Ferrell accept the Mark Twain Prize when the ceremony airs Oct. 31 on PBS.