While the critics have unsurprisingly panned Madonna’s directorial effort in her latest film, W.E., it looks like her fans aren’t showing any love for her, either. 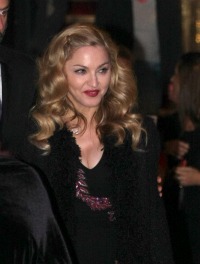 Madonna was met with a chorus of boos at the premiere of W.E., outside a Leicester Square cinema in London on Sunday night. Apparently, her fans were none too happy with the chart topper for spending only a few mere minutes chatting with them, after most had been waiting for hours to see her.

This might not bode too well for the Holiday singer, who was relying on her fans’ support for the film. She had previously dismissed her critics by saying, “It doesn’t matter what the critics think, it’s what the public thinks.”

The film follows two interwoven love stories: an affair between King Edward VIII and American socialite, divorcee Wallis Simpson, and a contemporary romance between a married woman and a Russian security guard. Many film reviewers have called the film weak, “lacking soul” and “burdened with risible dialogue and weak performances.”

Madonna made headlines last month for her diva-like demands at the film’s premiere at the Toronto International Film Festival. Rumors suggested that the material mom demanded festival volunteers to turn their backs to the wall when she passed them by in a hallway. Madonna also famously dissed a fan in Venice recently, after she was handed a bouquet of hydrangeas, and quipped, “I absolutely loathe hydrangeas.”