The Rum Diary’s smooth-talking villain Aaron Eckhart reveals how he spent his time while filming in Puerto Rico, and why playing the bad guy is not such a bad deal.

Aaron Eckhart is used to assuming villainous roles. And when the bad guys get to have all the fun, as is the case with his character “Sanderson” in The Rum Diary, it’s not hard to see why he enjoys it.

“I got to wear nice clothes, and got the girl, but mostly it was just the opportunity to work with Johnny [Depp] and work on a Hunter S. Thompson movie,” Eckhart told SheKnows. “I think that trumped being the bad guy.”

In the flick, Eckhart sports luxurious suits, drives shiny vintage cars, and has a gorgeous beachside home. And although some of his belongings seem a tad over-the-top (yes, I’m talking about the bejeweled turtle), Eckhart told us he shares some similarities in taste with Sanderson.

“I think my thing would probably be shoes and real estate,” he told us. “I like land and I like good shoes.”

Aside from all his stunning material things in the movie, Eckhart also lucked out with his love interest, the gorgeous Amber Heard. The two share an extremely steamy love scene in the ocean that Aaron says was a blast to film. Um, no kidding!

“That ended up being a very good day,” Aaron smiled. “She’s such a cool girl. We talked and laughed. And you know those can be long and awkward, and good thing Amber was there just to chill out and have fun.” 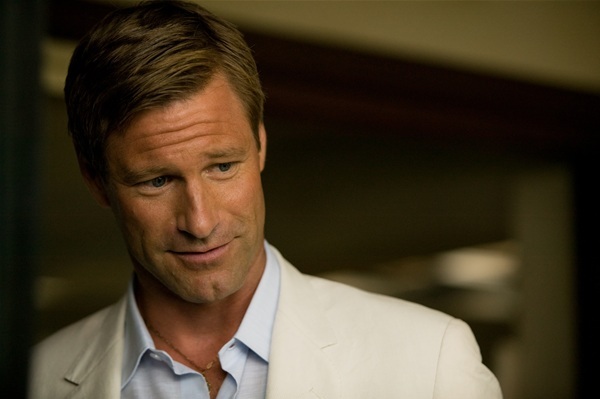 When they weren’t filming The Rum Diary, Aaron said his favorite things to do were surf, swim and peruse the island for photo ops.

“Any chance I got I was either in the water or making my way to surf,” Eckhart told SheKnows. “Luckily Johnny had to do all the work in this movie so I had a lot of days off.”

Eckhart is an amateur photographer, and told us he’s even thinking of doing a book with his pictures.

“I do black and white photography,” said Eckhart. “There was a bridge near my hotel room and these kids would come and jump off the bridge. I shot them endlessly. It was really cool.”

We’re saving a spot on our coffee table for you Aaron!