The Walking Dead left us with the shooting of Carl last week, a moment that even diehard fans of the comic book appreciated. Read on to see Carl’s fate unfold…

Season two of The Walking Dead opened with a bang last week — and we don’t just mean the ratings. Poor little Carl was shot by a hunter who took poor aim at a deer. How do we know it was a hunter? Keep reading to find out… 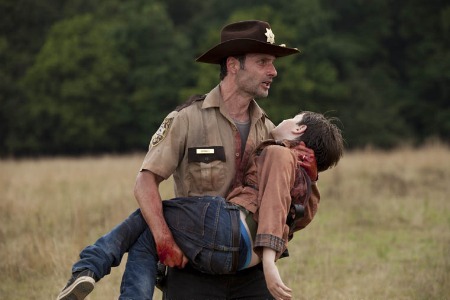 After some mucking around before the opening credits, The Walking Dead got down to business with episode two this week.

The episode started off where we left off last week: Rick rushing Carl to safety with Shane right behind him. They had a new addition to their party, however. The hunter that shot Carl, Otis.

Rick, Shane and Otis landed at Herschel’s (a supposed doctor) farm, a place oddly untouched by the zombies — weird, right? We’ll let that go for now.

After Herschel realized Carl had been shot by Otis and not “bit” by a zombie, he began working on the boy.

After countless blood donations by Rick and Herschel’s noble attempt to remove all the bullet fragments, it was realized they’d need more equipment to save Carl.

This prompted Shane and Otis to head to a FEMA camp, that also happened to be infested with zombies. Nice try, boys,

After Shane and Otis got done getting their “raid on,” they found themselves right in the middle of a zombie mess.

Here’s where AMC’s The Walking Dead is brilliant: One of the zombies was wearing a FEMA jacket, and the duo is now running for their lives in order to get Carl the supplies he’ll need to live.

Talk about clever humor and another nice cliffhanger!

Will Shane and Otis make it back? Will Carl survive? And how is Herschel’s farm clean from the zombies?

You’ll have to tune into The Walking Dead on AMC next week!

What did you think of episode two of The Walking Dead?