John Mayer is without his voice after undergoing throat surgery. Lucky for fans, the singer can still tell the world how he’s feeling — via his own personal blog.

News of John Mayer‘s throat surgery earlier this week comes via a personally written message from the singer to his fans. The 34-year-old was forced to undergo a medical procedure to remove a granuloma from just above his vocal cord, after attempts to heal by resting his voice failed. 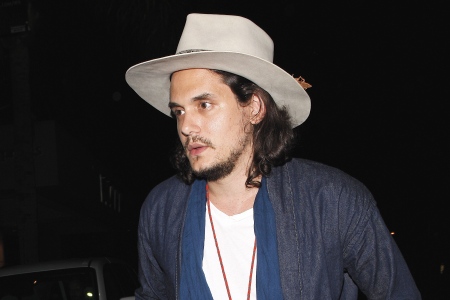 John Mayer’s birthday on Oct. 16 was filled with celebratory wishes from fans, but sad news about the condition of his vocal chords. Yet the singer, who is now facing a month of “complete vocal rest” after having throat surgery on Oct. 20, remains optimistic about his recent struggles.

John Mayer writes on his blog under a post titled Update:

I wanted to give you an update on the granuloma just above my vocal cord. I had surgery this afternoon to remove it and am now on complete vocal rest for a month or more. It’s been a very long process in waiting to see if time was an alternative to surgery, but even given two weeks’ voice rest (along with many other approaches), there was no change for the better.

I should be frustrated but I can’t seem to stop thinking about beautiful things… I never thought I’d be wishing I could do what I love again; I stay in at night, picking guitar parts off of records and dreaming of playing on the big stage. The only difference between now and when I was 18 is that now I have this beautiful, meaningful record waiting for me when I can sing it.

Until then, I’m taking off. Going to travel the country, look and listen.

P.S. thanks to those who sent birthday wishes, especially those who contributed to the Happy Birthday video… I streamed it to TV and let it run like a music playlist for the whole 30 minutes on my birthday. You’re the best.

In the wake of John Mayer’s throat surgery, the release of his new album has been pushed back until 2012.

Best wishes for a quick recovery from throat surgery for John Mayer!