Surprises, power struggles and Yom Kippur — it’s just your average everyday musings on the upper East side of Gossip Girl.

We knew Elizabeth Hurley was going to be spending a few episodes snuggled into the world of Gossip Girl, but she’s starting to look like a regular player. 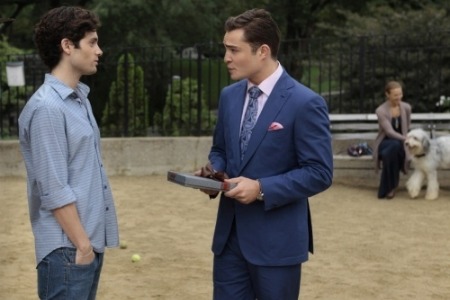 Last week, Dan had a meeting of the minds regarding the dish on his book, but this week on Gossip Girl, his relationship with Serena is going to be put to the test and Diana has a launch to get underway.

On this week’s new episode of Gossip Girl, “Fasting and the Furious,” It’s time to celebrate Yom Kippur but Blair and Louis run into a little problem where Louis’ family is concerned.

Elsewhere, Diana runs into a little glitch launching the New York Spectator and Serena is faced with choosing between her job and her relationship with Dan.

The CW officially describes “Fasting and the Furious” as the following: “In the midst of celebrating Yom Kippur with family and friends, Blair (Leighton Meester) and Louis (guest star Hugo Becker) find themselves in a power struggle with Louis’ family. Serena’s (Blake Lively) boss (guest star Michael Michele) puts Serena in the awkward position of choosing between her new job and her relationship with Dan (Penn Badgley). Diana (Hurley) prepares to debut the New York Spectator, but an unfortunate last-minute surprise delays the launch and Diana expects Nate (Chace Crawford) to do whatever it takes to save the day.”

With November approaching fast and Gossip Girl well into the season, we want to hear from you — what has been your favorite episode so far?

Head over to our comments section and sound off — we want the dish!