Zoe stumbles upon some interesting information on Hart of Dixie this week, causing quite the commotion in Bluebell.

Bluebell survived quite a heat wave on Hart of Dixie last week, but that was just the beginning. Things are about to get downright shocking this week… 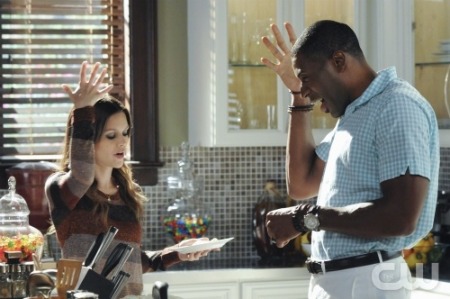 With the temperature rising on last week’s episode of Hart of Dixie, emotions were on edge. On this week’s new episode, “Faith and Infidelity,” Zoe happens upon some eye-popping information regarding the town’s minister and his wife.

If that wasn’t enough, Lemon is on a mission to rebuild Bluebell’s bridge that was damaged during Hurricane Katrina — too bad she’ll have to convince Lavon her plan is the best in order to get the funds.

The CW officially describes “Faith and Infidelity” as the following: “Zoe (Rachel Bilson) discovers something shocking about the local minister (guest star Peter MacKenzie) and his wife (guest star Kerry O’Malley), causing quite a stir among the residents of Bluebell. Lemon (Jaime King) is determined to find the funds to renovate the town’s historic bridge that was destroyed by Hurricane Katrina, but first she is put in the extremely awkward position of having to convince Lavon (Cress Williams) to choose her proposal over so many other worthwhile submissions.”

CW fans have been loving Hart of Dixie and the return of Rachel Bilson. The network is so confident in its choice to back Hart of Dixie, they announced the show had been picked up for a full season order along with Ringer and The Secret Circle.

The CW president Mark Pedowitz said, “With compelling storylines, engaging characters and tremendous buzz we firmly believe Hart of Dixie, Ringer and The Secret Circle can become signature series for The CW, the kind of top-notch shows that are synonymous with our brand.”

What do you think of Hart of Dixie?