Catherine Tate is back for new recurring role on The Office. 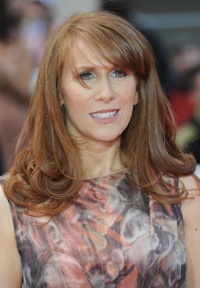 After her character fell just short in the competition for new regional manager at the Scranton office of Dunder Mifflin, Catherine Tate will get a reprisal role on the immensely popular series, The Office.

Tate’s character, Nellie Bertram, first appeared on the series last season as a potential candidate to fill the position of departing regional manager Michael Scott. When the new season premiered in September, fans learned Andy Bernard (played by Ed Helms) would be taking over the manager position and actor James Spader would be added to the series as the company’s CEO. The show’s producers did not want that to be the last of Tate at Dunder Mifflin, though.

“Catherine is hysterical. We introduced her briefly in last season’s finale and knew she had to be a part of the show somehow,” executive producer Paul Lieberstein said in a statement. “Her relationship with Robert California (James Spader) will be far from professional. We’re thrilled that she’s joining the cast.”

The esteemed British comedian will join the second half of the current season of the award-winning series as a new special projects manager hired by her friend and company Chairman of the Board, Jo Bennet (played by Kathy Bates). Her character will work directly for the corporate office with much favoritism from Bennett, ultimately inspiring hilarious conflict among the employees at Dunder Mifflin.

Tate, a British Comedy Award winner and BAFTA nominee, previously starred in and wrote for her own award-winning series on BBC. The Catherine Tate Show showcased Tate’s comedic versatility through her portrayal of multiple characters in a variety of sketches. Tate has also co-starred in films such as Gulliver’s Travels with Jack Black, Monte Carlo with Selena Gomez and Leighton Meester, Starter for 10 with James McAvoy and British films such as Mrs. Ratcliffe’s Revolution and Sixty Six.

Tell us what you think: Is Catherine Tate a good addition to The Office?