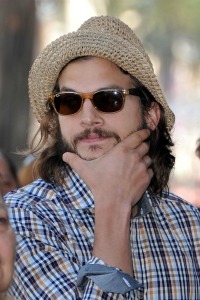 After the news of his alleged philandering ways that has broken over the last several weeks, Ashton Kutcher is the last person you may want to hear talking about honesty and integrity. He’s doing it anyway.

The Two and a Half Men star posted a rambling video on his Chime.in page ranting about the lack of honesty in the media — seemingly referring to the explosion of speculation surrounding his marriage to Demi Moore in the wake of accusations he cheated with Sara Leal on the couple’s sixth wedding anniversary.

“I just wanted to open up a little dialogue in the state of honesty, the status of truth as it pertains to literature and media,” Kutcher says.

“When the cost structure comes down on printing… the level of honesty of literature starts to plummet… In relation to media and social media today where the threshold to actually have literature printed and distributed… is zero dollars… thereby there is no gatekeeper of the truth.”

In the end, Kutcher asks that we “be certain that we are doing our own diligence that what we are saying is for the benefit of another.”

Most notable: He is not wearing his wedding ring in the video.

Neither Kutcher nor Moore have directly addressed rumors that they are on the verge of a split. No matter, because their marriage may not be legal anyway.