Demi Lovato has been picked to sing the national anthem at the World Series. When will she perform? 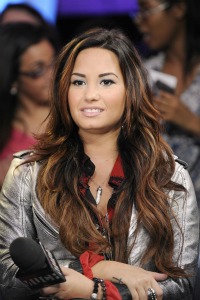 Demi Lovato will join Zooey Deschanel in an all-star lineup singing the national anthem at this year’s World Series. Since the Skyscraper singer is a huge baseball fan, this gig is right up her alley!

Lovato will belt out “The Star-Spangled Banner” before game five of the World Series on Monday, Oct. 24. She credits her fans with getting her the job.

“Only my lovatics could land me a spot singing the national anthem at the WORLD SERIES!!!!” she wrote on Twitter this morning. “I couldn’t do it without you guys!!!!”

The Texas-born Disney star is making no secret about who she is rooting for in the championship. Last night Lovato tweeted, “Alright guys!! Time to watch the game! Go RANGERS!!!!!”

Lovato joins a star-studded lineup singing the tune before the games, including Trace Adkins and Ronnie Dunn. Zooey Deschanel will sing the national anthem before game four on Sunday.

The move marks yet another milestone in Lovato’s recovery. The teen idol checked into rehab last year for then-unspecified emotional issues. Lovato later revealed her troubled teen years — she suffers from an eating disorder, a form of bipolar disorder and self-harming.

The singer said Skyscraper, her first single post rehab, was like therapy to her and making the video helped her on her road to recovery.

Demi Lovato is hittin’ the road in November

Has Demi Lovato found her Romeo?