What would Michael Jackson think of his daughter going to a Chris Brown concert… and tweeting about it on her Twitter account! 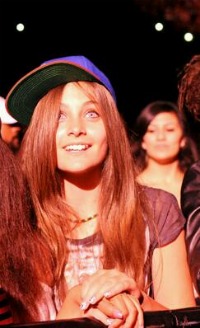 Despite being branded as one of the most troublesome singers in the entertainment industry, Rihanna’s ex-boyfriend Chris Brown is still getting lots of love from his fans.

And there’s one fan in particular who’s not hesitant about showing her love — and that’s 13-year-old Paris Jackson.

The daughter of the late Michael Jackson was recently spotted at Chris Brown’s concert at the Staples Center in Los Angeles sans her two brothers, Prince Michael and Blanket, but with a group of friends. Observers say Jackson spent her evening screaming Brown’s name while singing and dancing along to his concert set.

The young Jackson even threw her arms in the air and made a heart shape with her hands for Chris, according to the Daily Mail. Apparently, she had one heck of a good time.

She later took to her Twitter account to express how much fun she had at the concert, sending out a special tweet to the singer, “AMAZING Show Tonight!! You were Outstanding!!”

“Blew my MIND!!! I was in the front and it was just like, mind-blowing!! hahaha! Amazing, mind-blowing, outstanding, crazy, like indescribable lol,” she added.

It must be a nice feeling to know that the daughter of the King of Pop is one of your biggest fans. Given Brown’s track record, we don’t know what Michael Jackson himself would have thought of his daughter publicly praising the controversial singer — or having a Twitter account, for that matter.