Tim Burton is bringing a specially-designed balloon to the Macy’s Thanksgiving Day Parade. What character will it be?

The Macy’s Thanksgiving Day Parade is one of America’s most cherished traditions — and this year we’ll see a new character in the beloved balloon lineup! 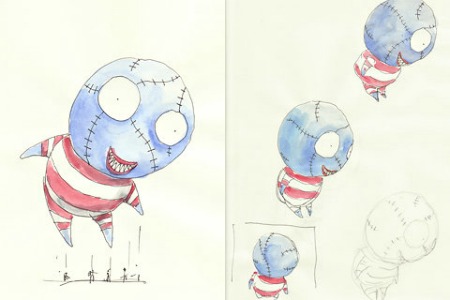 Director Tim Burton is contributing a new balloon this year, but it won’t be one of his existing spooky characters like Jack Skellington or the Corpse Bride. Instead, the creative genius has developed a brand new character especially for the parade!

“It’s such a surprise to be asked, and it was great,” Burton told the New York Times. “It’s such a surreal thing that you don’t even believe what you’re hearing. Somebody’s trying to play a joke on you or something. It had that kind of feeling.”

The new character is called B. Boy and Burton says he was created like Frankenstein, “from the leftover balloons used in children’s parties at the Great Ormond Street Hospital in London.”

“Forbidden from playing with other children because of his jagged teeth and crazy-quilt stitching, B. retreated to a basement lair, where he obsesses over Albert Lamorisse’s film The Red Balloon and dreams that he, too, will be able to fly someday,” wrote the paper.

Burton put his own melancholy spin on what we used to think of as a happy object.

“There’s always been something about balloons,” Burton said. “You see them deflated and you see them floating. There’s something quite beautiful and tragic and sad and buoyant and happy, all at the same time.”

This isn’t Burton’s first experience with the parade, though. In 1989’s Batman, Burton had the Joker stage a grotesque mockup of the celebration.

“I didn’t bring it up with them,” Burton said.