Rob Kardashian stuck up for his family on the Ellen show, after finding out that President Obama prefers his daughters not watch Keeping up with the Kardashians. 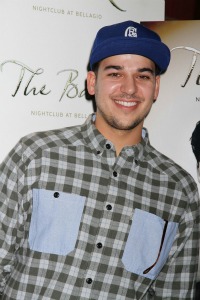 Just this week, we learned about the viewing habits of the Obama family and what show they won’t be watching on Sunday nights. President Obama revealed that he prefers his daughters Malia and Sasha not watch Keeping up with the Kardashians — and Rob Kardashian is fine with that!

Said the Dancing with the Stars contestant, “to each his own,” while on the Ellen show.

“I understand he’s trying to raise his daughters a certain way and that’s fine. Everyone has an opinion.”

“But,” he explained, “you really learn a lot from our show. There are no negative things on our show. There is always a positive message at the end of the day. But go Obama!”

With that, Ellen replied, “That’s very sweet, I agree with you. It’s not a negative thing. You’re a loving family and supportive, and very real.”

The hoopla came about after First Lady Michelle Obama gave an interview to iVillage where she spoke about her children’s television viewing habits.

“Barack really thinks some of the Kardashians, when they watch that stuff, he doesn’t like it that much.”

She continued, “I sort of feel like if we’re talking about it, and I’m more concerned with how they take it in, what did you learn when you watched that? And if they’re learning the right lessons, like that was crazy, then I’m like, OK.”

Apparently, the family was surprised by the news, because President Obama told Khloe directly (according to the family) that he thought Keeping up with the Kardashians was a great show when they met last year.

But the First Lady laughed when she said, “I am just hoping that I don’t mess them up. They’re terrific girls, poised and they’re kind and they’re curious.”