Unfortunately for Lindsay Lohan, the dead bodies she’s working with at the morgue aren’t props from a film set. 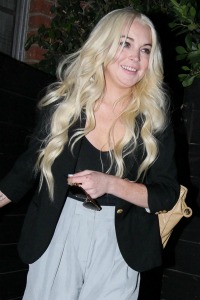 Rather than working on a blockbuster movie or high-end fashion shoot, troublesome celebrity Lindsay Lohan was at the morgue this morning, where some of her duties for the day will include cleaning toilets, emptying trash cans and having close encounters with dead bodies.

The actress arrived on time today at the Los Angeles-area morgue to begin serving her 120 hours of community service as part of her shoplifting sentence.

Lohan was met by paparazzi and several media outlets outside the morgue’s entrance before making her way in.

According to TMZ, Lohan was in shock when she first laid eyes on the dead bodies at the morgue. Even though she won’t be touching them, she is required to wash the sheets used to cover the bodies — which means encountering some blood- and fluid-stained linens.

Sources say despite her gruesome duties, Lohan appears to be in good spirits and is even talking to the other people in her group and maintaining a positive attitude.

Lohan was grilled by Judge Stephanie Sautner earlier this week for failing to complete her court-mandated community service hours at a women’s center in Los Angeles. The former child star was handcuffed and escorted to jail before she was quickly released on a $100,000 bail, according to her rep.

Lohan will be doing two eight-hour shifts a week until her required community service hours are completed. She is scheduled back in court on Nov. 2 for a hearing on whether her probation should be revoked.

Should Lohan fail to complete her community service hours, she faces up to 18 months behind bars.