Taylor Armstrong denies she is dating anyone, contrary to tabloid reports. 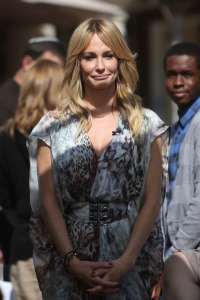 Taylor Armstrong was just widowed in August — but tabloids are already tying her to another man. Are the rumors true?

Armstrong is being tied to Most Eligible Dallas star Matt Nordgren, but The Real Housewives of Beverly Hills favorite says no way. She squashed the chatter on Twitter.

“I am NOT dating anyone from anywhere! Stop the rumors! I am trying to heal with my daughter,” she tweeted this morning.

Nordgren himself denied the rumors earlier this month by retweeting an article on Gossip Cop with a quote that stated, “A rep for Nordgren tells Gossip Cop that he and Armstrong are ‘just friends,’ and that he merely wanted to ‘welcome her to the city’ as she’s part of the Bravo family.”

Fans of Armstrong will find this news a welcome relief as it was revealed Nordgren himself has a violent past. Back in 2003, he was charged with criminal mischief after attacking another man’s car, seemingly without provocation. The charges were later dropped when the complaint was withdrawn.

Armstrong credits Bravo for saving her life after allegedly suffering domestic violence at the hands of her late husband Russell Armstrong.

“If cameras were not in my life, there’s a good chance I wouldn’t be sitting here today,” Taylor told KTLA-TV in Los Angeles.

Read on for more Taylor Armstrong