Lil Wayne got an early start in the entertainment business and he plans on ending early, too. The rapper has announced plans to retire by age 35! 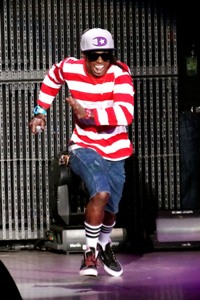 At the age of 29, rapper Lil Wayne is a seasoned veteran of the music business. And in just a handful of years, the rapper plans to leave it all behind in favor of spending more time with his kids.

“Basically, I have been doing this for eighteen years. That’s reason number one,” Lil Wayne reveals to GQ magazine of his plans to retire. “I have accomplished all that I have set out to accomplish and more. Also, I have a label, and I’ve only put out two artists. I have a lot more work to do, and it’d be selfish to not focus on being the boss and focus on their projects.”

Lil Wayne, who became a father at the age of 15 to daughter Regina, has his sights set on becoming a family man as well. “The main reason is my kids,” he confessed. “Now, if I thought I’d be selfish to my artists, imagine what I think I would be doing to my kids.”

Along with his daughter Regina, Lil Wayne is the father of three sons. Dwayne III, was born on October 22, 2008. His son Cameron Carter was born to actress Lauren London on September 9, 2009, and Lil Wayne’s fourth child, Neal,  was born on November 30, 2009 with singer Nivea.

“I have enough money that they don’t have to ever do anything — which, they will do everything, ’cause they ain’t getting sh*t,” Lil Wayne tells the magazine of his children’s future. “Six [more] years, I can do this Lil Wayne thing, and my boys will be about 7 and 8 years old. And man, it’s all about them then. You know, whatever they’re doing. Sports. Whatever they’re into. That’s where I am. I’m at every game. I’m the dad with the hat on. The jersey. That’s me.”

Best wishes on the early retirement to Lil Wayne!