Prosecutors rested their case against Dr. Conrad Murray yesterday. The prosecution spent Thursday interviewing several medical experts to prove key points in their argument: Michael Jackson‘s death was a result of Dr. Conrad Murray’s failure to monitor Jackson after injecting him with the sedative propofol through an IV drip. 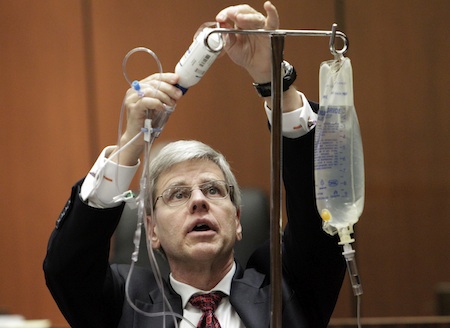 One of the key witnesses for the prosecution was Dr. Steven Shafer (pictured above). His testimony was clear, concise, and seemed damaging to Murray’s defense. Shafer reported not only that he believed Michael Jackson’s death was completely avoidable, but also that Murray’s claim that Jackson injected himself with lethal amounts of propofol was physically impossible.

Earlier testimony from other witnesses for the prosecution said Murray called a girlfriend and one of his clinics at the time of Jackson’s death. Shafer went on to state the lack of oxygen in Michael Jackson’s lungs caused his heart to stop, which ultimately resulted in his death.

“Had Conrad Murray been with Michael Jackson during this period of time, he would have seen slowed breathing and the compromise in the flow of air into Michael Jackson’s lungs, and he could have easily turned off the propofol infusion.”

Murray’s defense team stated they believe Jackson either swallowed propofol or injected himself with a needle.

“People just don’t wake up hell bent to grab the next dose in a syringe, draw it up, and shove it in their IV again. It’s just a crazy scenario.”

“There was no sedation at anytime following oral consumption of propofol.” Shafer went on to describe how the liver would automatically absorb the drug to prevent it from entering Jackson’s bloodstream. Known as the “first pass effect,” Shafer said he believed Murray’s defense ignores the basics taught to first-year medical students.

On Friday, Murray’s defense will have their chance to present evidence and testimony supporting their case. After the defense rests, the prosecution can bring forward testimony and evidence as a rebuttal. After both sides complete their arguments, the case will be handed over to the jury for deliberations and a verdict. CNN reports the trial will wind down next week.

Dr. Conrad Murray is on trial for involuntary manslaughter, which means he is accused of unintentionally killing Michael Jackson. Murray faces a maximum of four years in prison and a loss of his medical license if convicted. However, he could also get as little as house arrest. TMZ speculates Murray will likely receive a 2-year sentence if found guilty.