For a while there, we couldn’t tell if Justin and Jessica were on or off-again, but it looks like this celebrity couple is most definitely back on. 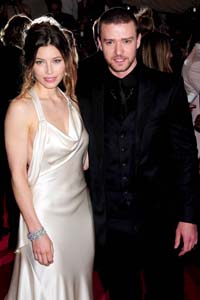 Actor and singer Justin Timberlake may be giving his relationship with actress Jessica Biel one more try, despite the couple calling it quits earlier this year, after four years together.

People magazine reports Biel accompanied Timberlake to the after-party for his new film, In Time, in Los Angeles Thursday night, where the two shared a few intimate moments together.

An observer tells the magazine, “[They] became more and more affectionate, sneaking kisses, whispering to each other, and sharing quick back rubs and caresses.”

“At one point, she pretended to punch him a couple times and gamely bounced up and down like a jack in the box,” the observer added.

Biel has kept a low profile since the couple split in early March, while Timberlake has been rumored to be dating his Friends with Benefits co-star Mila Kunis — a rumor which both actors have denied.

There were also whispers that Biel was getting hot and heavy with Hollywood heartthrob Gerard Butler while they were shooting their film Playing the Field in Louisiana last May, which quickly ended once filming wrapped.

The seemingly on-again couple added speculation to their relationship rumors this summer, when they were spotted riding bicycles together in Toronto while Biel was shooting the remake of Total Recall.

The couple shot down rumors that they were together again at that time, insisting they were only friends.

Given their recent flirting, maybe that’s friends with benefits?

Timberlake and Biel also spent Thursday evening with his film’s co-stars, Olivia Wilde and Amanda Seyfried before leaving together around midnight.

It looks like what goes around really does come back around, right?