Word on the street is that Dina Lohan has written a memoir about her troubled daughter Lindsay Lohan. Shocking news — or just sad? 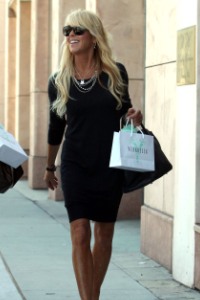 While Lindsay Lohan spends her days in court and on morgue duty her mother, Dina Lohan, has been shopping a “memoir” about her troubled daughter.

TMZ reports Dina Lohan was seeking a publisher for her tell-all book as recently as two weeks ago. A copy obtained by the gossip news site reveals sections of the 49-year-old’s prologue.

“I blamed her friends, her career and her handlers for a newfound lifestyle of partying excessively,” Dina Lohan writes.

“Drinking, drugging and behaving irresponsibly became Lindsay’s way of daily living — and it tore me up inside,” continues Dina, who has been harshly called out by Liv Tyler’s mom for her “disturbing” relationship with Lindsay.

Dina Lohan’s memoir also reflects back on the days before Lindsay became famous — when she sent a chaperone to look after her daughter in Los Angeles.

“How could I deny my daughter the chance of a lifetime?” Dina, who lived in New York at the time, writes. “How could I hold Lindsay back from her dream of becoming an actress? So, I listened to others and sent my daughter to Hollywood with a few pieces of luggage and a chaperone.”

By the time Lindsay Lohan started to run into trouble with the law, Dina says she was helpless, unable to simply demand her daughter return to New York. Adding to the conflict were her roles as both the budding star’s mother and manager.

An unnamed source reveals a ghost-writer did the actual work of writing the book after long sit-downs with Lindsay’s mother. So far no publishing houses have stepped up to make Dina Lohan’s tell-all book “a bestseller” as she and her rep are hoping for.

Are you surprised to hear Dina Lohan has written a tell-all book about Lindsay Lohan?