Kim Kardashian will celebrate her birthday in Las Vegas on Saturday — will Kris Humphries be by her side? 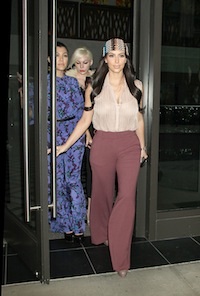 Today is Kim Kardashian‘s birthday! Born on October 20, 1980, who would have guessed this Beverly Hills baby would some day be a reality television superstar?

Kim turns 31 today and told reporters at the Angel Ball on Monday that this year her birthday feels, “freaky.” What’s so freaky about passing the 30-year-old milestone? “I think 31 is even worse. It’s like now I’m really an adult!”

Although, we must say, being an adult with millions in the bank and a legion of loyal fans probably isn’t too bad.

True to her workaholic nature, E! reports Kim is working through her birthday. Kourtney & Kim Take New York films all this week and then Kim will head back to Los Angeles before her Las Vegas celebration. Kardashian tweeted, “Can’t believe we are done w New York! 3 months went by so fast! Boxes everywhere in our hotel! All ready to go home! #BeenFunNY.”

The Kardashian family wished Kim all the best on her day as they took to Twitter to tweet birthday messages.

One of the big questions on everyone’s mind is whether Kim Kardashian’s husband, Kris Humphries, will show at her birthday extravaganza. The two are reportedly on the way to splitsville.

If he does show, it may put to rest — or at least quiet down — the divorce rumors swirling around the newlyweds. If Humphries doesn’t make an appearance at his wife’s birthday, well, then, it’s probably not a good sign for the couple.

Regardless of Kim Kardashian’s marriage troubles, SheKnows wishes her a very wonderful birthday.