New Girl star, Zooey Deschanel, is stepping onto the field — the baseball field that is. The Fox star is prepping to sing during the World Series. Read on for details. 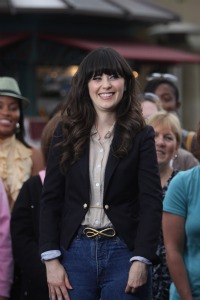 All eyes will be on Zooey Deschanel as she belts out the national anthem at the World Series.

Zooey Deschanel has found success with Fox’s New Girl and while the show has been put on hold until Nov. — thanks to scheduling –the actress isn’t slowing down.

In fact, she’s part of the World Series lineup of singers who will take on the “The Star-Spangled Banner” during the all-important baseball showdown.

In a press release from MLB.com, “Country music stars Trace Adkins and Ronnie Dunn plus Zooey Deschanel of the hit FOX show New Girl will perform the national anthem prior to Games Two through Four, respectively, of the 2011 World Series between the St. Louis Cardinals and the Texas Rangers. Coverage begins at 7:30pm Eastern on FOX.”

Zooey Deschanel isn’t a stranger to music. Her band, She & Him, will be releasing a Christmas Album entitled A Very She & Him Christmas on Oct. 24 — just in time for stocking stuffer season!

Deschanel’s show New Girl is being shelved until Nov. due to the “scheduling conflict” brought on by the World Series and The X Factor, but fans can rest easy — it will be back! With the strong start it garnered — there’s no way it’ll be cancelled.

Out of this World Series lineup, who do you want to see the most — Trace Adkins, Ronnie Dunn or Zooey Deschanel?

Something tells us, Zooey Deschanel is going to be the winner.

Don’t forget to check out Zooey Deschanel during game four of the World Series on Fox!