50 Cent is taking his Street King mission to feed starving people in Africa to another big level. 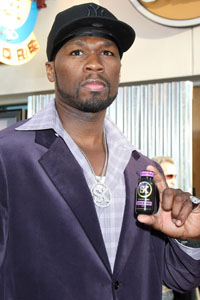 50 Cent surprised fans and critics alike when he announced his intentions to create an energy drink specifically to raise money for famine relief in Africa.

“I want to impact peoples lives more. I created a new goal for myself, I want to feed a billion people in africa over the next 5 years,” the rapper tweeted in July.

Now, the rapper — born Curtis Jackson — is trying to help even more people with his newly launched Street King website and Facebook page.

“Every day, families in Africa go without food and water, never knowing when their next meal might be; but we can change that if we all work together. In order to make a difference, every purchase of my new energy shot, Street King, will provide a meal for a child in need,” Fiddy wrote in a Huffington Post op-ed.

“In fact, now I’m taking things to the next level: for the next week, to get the word out about what we’re doing, I’m donating one meal for every Like I receive on the Street King Facebook Page. Together, with the UN’s World Food Programme and you, we’re hustling to get to one million Likes and, if we do, I’m going to double my donation to two million meals.”

50 Cent compares his personal plight growing up in Queens to his newfound mission of helping those most in need. “I had to overcome challenge after challenge in order to take my life from nothing to living my dreams. And I’m thankful for that because it helped mold me into who I am today. That’s why I want to give back to those without, to help make a change in their lives,” he said.

The actor and author has enlisted the help of some very famous friends — Usher and Justin Bieber — to spread the message. However, the biggest help will come from you: his fans.

“My goal is to provide a billion meals over five years; getting one million Likes and donating two million meals this week would be a huge start. I have no doubt that with your continued support, we can make it there. That’s what energy’s all about,” he said.