The ghost mystery got interesting this week — check out what went down on an all-new episode of The Vampire Diaries.

Klaus (Joseph Morgan) took off in a hurry at the mention of Mikael’s (Sebastian Roche) name last week, leaving Stefan (Paul Wesley) with no connection to his human side — what does that mean for our favorite humans and vamps of The Vampire Diaries this week? Read on to find out… 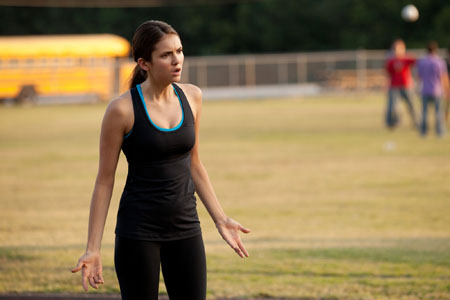 Stefan flipped the switch on his humanity last week on The Vampire Diaries, leaving Elena (Nina Dobrev) the victim of his douchebag ways on an all new episode titled “Smells Like Teen Spirit.”

If you missed any of this week’s episode of The Vampire Diaries, you picked a bad night to step away. Here’s everything you need to know…

TVD: stefan gets out of control

With Stefan munching his way through the bimbos of Mystic Falls, Elena decided it was time to go all “Elena the Vampire Slayer” in order to protect herself.

She and the gang — a.k.a Damon (Ian Somerhalder), Ric (Matt Davis) and Caroline (Candice Accola) — came up with the brilliant idea to try and lock him up during the school’s annual Back to School Bonfire night.

Elena did her best, “I’m drunk, help me” act, and it worked like a charm. Stefan was distracted long enough for Ric to take him down with some nifty vamp-weapons.

Over in ghost-land, Vicki convinced Matt that she could be brought back to walk the Earth for good — if he helped her. The key? Some blood, candles and a powerful witch from the other side who Anna warned Jeremy (Steven R. McQueen) about.

Speaking of Jeremy, once Bonnie (Kat Graham) found out what was going on, she was not happy. It turned out the powerful witch who sent Vicki back did it for a reason — to destroy Klaus’ hybrids. More importantly, the person connected to the whole hybrid situation — Elena.

Just as Elena and Ric were loading Stefan into the truck, Vicki set it ablaze.

While Elena tried to escape, Bonnie chanted some witchy voodoo to reverse the spell, but it wouldn’t work unless Matt let Vicki go — it took some tears, but he did what had to be done.

Stefan, Ric and Elena made it out of the fire and back to the boarding house, where Stefan called her “pathetic” for still believing in him.

She gave him a nice little warning — a strategically placed stake to the rib cage area. She totally missed the heart on purpose.

To wrap up the ghost issue — Jeremy can literally feel Anna and there’s a mean-ass ghost named Mason haunting the boarding house now — more specifically, Mason the werewolf is back!

Katherine fed Mikael a little human blood — but he’s been off the “human stuff” for a long, long time. Guess what he eats? Katherine! He chomped on her good — once she let him out of his chains.

We didn’t get to see the end result of that just yet.

CW teams up with Netflix>>

Then there was Tyler. Tyler strutted around with an attitude the whole episode until we found out he was Team Klaus.

Thanks to Klaus turning him into a hybrid, Tyler (Michael Trevino) now feels a pull towards Klaus and Rebekah wasted no time trying to get her fangs into him.

She was kind enough to bring him a human to feed on.

Great, now we’ve got Rebekah going after Tyler, Mason back in the fold and we still don’t know what’s going to happen with Klaus and Mikael. This is intense!

What did you think of “Smells Like Teen Spirit?” Don’t forget to check out The Vampire Diaries next week to find out more about Mason’s return.