Patrick Dempsey is donating one of his race suits to an auction benefiting the family of Dan Wheldon. 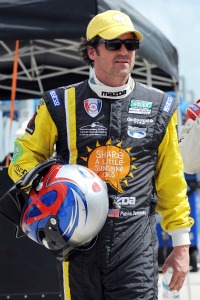 The racing community is pulling together to help the family of Dan Wheldon in the wake of his tragic death Sunday — and now Patrick Dempsey is helping out, too.

The Grey’s Anatomy star, who is an accomplished race car driver whose team competes in the Grand Am Rolex Sports Car Series, has donated a Le Mans racing suit to an auction benefitting the family of Dan Wheldon.

The eBay auction is being put together by fellow racer Graham Rahal and initially started with just a single helmet. It has now grown to include items from Chelsea Handler, Lance Armstrong, Kyle Busch, Juan Pablo Montoya, Jimmie Johnson, Tony Kanaan, Dario Franchitti (husband of actress Ashely Judd), Marco Andretti and dozens of other drivers and celebrities.

eBay is helping out by waiving its fee and promoting the effort.

“I’m happy to tell everyone that I just got done speaking with the folks at eBay, and not only are they going to waive their fees for us, but they are also going to help us promote it to their millions of customers! Thanks to them for their support,” Rahal wrote on his Facebook page.

The auction is still coming together and a start date has not yet been announced.

Dan Wheldon was killed in a horrific crash during an IndyCar race in Las Vegas on Sunday. He leaves behind his wife Susie and two sons, two-year-old Sebastian and seven-month-old Oliver.

The lauded driver’s death has highlighted the concerns of many IndyCar drivers about racing open wheel cars on steeply banked ovals. Wheldon’s cause of death was listed as blunt head trauma probably caused when his car slammed into the track’s catch fence.

A public memorial service for Dan Wheldon is being held Sunday at the Conseco Fieldhouse in Indianapolis, close to where he won the prestigious Indy 500 — twice. The memorial will be broadcast live on Versus at 4 p.m. EST.