The troubled son of Hollywood royalty will serve more time in jail for drugs. 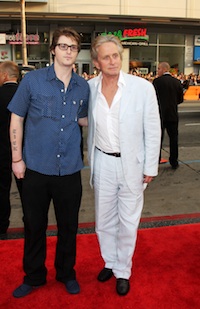 Cameron Douglas, son of Hollywood A-lister Michael Douglas, pled guilty on Thursday to narcotics possession while he was still jail. He will likely serve another year-and-a-half in prison for obtaining drugs while incarcerated. The 32-year-old took a plea deal which reduced his sentence by several years — the charge typically carries a penalty of up to twenty years in jail. Cameron will officially be sentenced Dec. 21.

Michael Douglas was not present at the hearing but released a statement:

“Cameron accepts full responsibility for his conduct. While he has made much progress, he is still not cured. Most people and their families are able to address this issue privately and outside the spotlight. Unfortunately this has not been possible here — for reasons completely outside of his control. He thanks those that have rooted for his recovery and looks forward to the day when he will not disappoint.”

This is just one of many drug-related legal issues for Cameron. He was originally busted in 1999 for cocaine possession in New York but pled guilty to a lesser charge which meant no jail time. In 2007, he was charged with a felony after police found cocaine in his car. In 2009 Douglas was arrested again, but this time for possession of methamphetamines. After additional drug arrests in 2010, Douglas was sentenced to five years in prison — which he is currently serving — for dealing large amounts of heroin out of a hotel room. He was also ordered to pay $25,000 in fines and complete over 400 hours of community service.