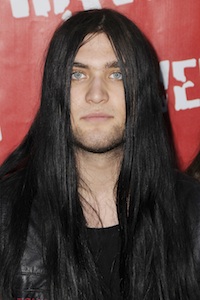 Nicolas Cage’s 20-year-old son, Weston Cage, and his ex-girlfriend, Christina Fulton, are going to be the new stars of reality television thanks to VH1. The show’s ominous title, Uncaged, will follow the two ex-lovebirds as they go about their lives. Cage and Fulton have a 20-month-old son together that will be included in the series.

A source told Star magazine, “Christina said the show will be a modern-day Addams Family. Weston just wants to show the world he’s not mentally ill.” Why might people think Weston’s a little nutty? Well, it just so happens TMZ has some pretty unflattering evidence on the guy from June.

From TMZ, “Weston was at The Farmer’s Kitchen in Hollywood around 4:00 today, when his trainer told him he couldn’t eat something on the menu. For some reason, we’re told Weston went off and started pushing the trainer in a violent way, at one point trying to roundhouse the trainer. The trainer took Weston down, and someone else tried calming Nic’s son down, to no avail. Cops showed up and told Weston if he didn’t get to the ground they would tase him. Weston complied and cops put Weston in handcuffs. They were so worried he was unstable they strapped him to a gurney.”

Later on that same day, Weston was put on an involuntarily psychiatric hold at a Los Angeles hospital.

A month later, Weston was arrested for domestic violence against his wife Nikki Williams. (Yep, you read that right. He’s married — but the reality show follows him and his ex-girlfriend.) After he was released on bail, Cage posted a video on his Facebook page claiming he was the victim. He also asked his friends (and fans?) to vote on whether or not he should divorce Williams. The final tally had divorce winning, and Weston did go through with filing the paperwork. His anger didn’t last long — the two later reconciled in July. A few weeks later, Weston checked in to rehab for a 30-day treatment stay.

There’s no word yet on exactly what Uncaged will be about or what the plot lines will revolve around. If it’s anything like Weston, the show is probably going to be fairly intense.