Michael Lohan made some pretty serious drug allegations against his daughter, Lindsay Lohan.

Michael Lohan further cemented his place as Father of the Year during an interview he gave last night on CNN’s Headline News. The Celebrity Rehab with Dr. Drew star — (can we can him a star for that?) — told Jane Velez-Mitchell that he thinks estranged daughter Lindsay Lohan is suffering from more than just bad dental hygiene. 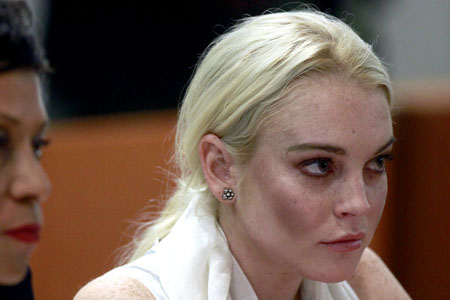 “She certainly doesn’t look like the Lindsay that she used to be,” the elder Lohan said of his daughter. “She had her teeth fixed, thank God. But what caused her teeth to be fixed needs to be fixed itself.”

He added that he hasn’t seen his daughter in a while, though the recovering addict knows another addict when he sees one.

“She’s smoking either crack or meth,” he declared on the show. “One or the other. I’m not going to shade it. You can’t dance with the devil and expect to go home with Jesus. This kid is messing around with the wrong people.”

Instead, Michael said that Lindsay should take a page from another troubled star: Charlie Sheen.

“Charlie Sheen is doing the right thing now finally,” Michael said. “He got rid of his assistant. Lindsay has her assistant around her that just turns a blind eye. Charlie has people that actually are around him that said they’ll call the cops if he does something wrong.”

Lindsay is facing some serious jail time, thanks to her revoked probation. However, her dad thinks she needs to get as far away from California as possible — as in the G&G Holistic Drug Rehab in Florida.

“She’s beating the system,” added Michael. “And she’s not going to be working any more, and she’s going to wind up in a morgue if someone doesn’t do something to get her help.”

Well, she technically is in the morgue — she’s supposed to serve 16 hours of time in the Los Angeles County morgue before Nov. 2. It’s not going too well so far — she was turned away this morning for being late.

Is Michael Lohan concerned for his daughter, or just for his own publicity?