Adam Levine had a few choice words for Fox News after the network used a Maroon 5 song. Fox News anchors responded in a very mature manner.

Think Adam Levine is a fan of the Fox News channel? Think again. The Maroon 5 frontman took to Twitter Wednesday to express his distaste over the channel’s use of their music. 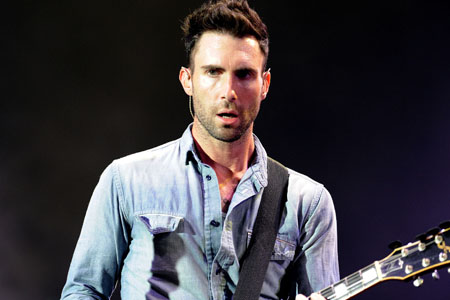 “Dear Fox News, don’t play our music on your evil [expletive] channel ever again. Thank you,” he tweeted.

Fans were either for or against Levine’s comments, though Fox News didn’t respond in a tweet. However, some of the network’s anchors did make comments during the overnight show Red Eye. Did the commentators make a structured, thought-out response? Nope – they turned to jokes to dismiss Levine’s opinion.

“I guess we shouldn’t play their music then, right?” host Greg Gutfeld commented to co-host Andy Levy. “I haven’t heard them, it might be good to hear what they sound like.”

They then played a song from the band while the hosts contorted their faces in mock wretching and disgust.

“I know what that is, Andy!” exclaimed Gutfeld. “It’s crap! If you go to iTunes and search under the category called crap, that comes up!”

“I do know that Chris Martin once emailed Levine and thanked him for making Coldplay seem edgy,” Levy added.

“Well it certainly did, and you know what else, I know this jackass!” Gutfeld sniped. “He always wears a cap! I gotta wear a cap because I’m insecure! Shut up!” Levine isn’t known for wearing hats.

“Because he’s balding!” added another co-host, Andrea Tantaros. “Don’t forget, he’s also a game show host too! One of those talent shows.”

Levine hasn’t responded to those comments, though Gutfeld has now taken to retweeting Levine’s other comments with snarky jokes.

“Why did Maroon 5 cross the road?” he said on the show. “Because crappy music is legal there!”

Who’s side are you on: Adam Levine or Fox News?

Oh, hey there: Adam Levine gets naked in Russian Vogue
Maroon 5 frontman Adam Levine slams the MTV VMAs
Adam Levine to OUT: My brother is gay, we knew when he was two