Ronnie Ortiz-Magro and Sammi Giancola make-up and break-up more than any celebrity couple in Hollywood. 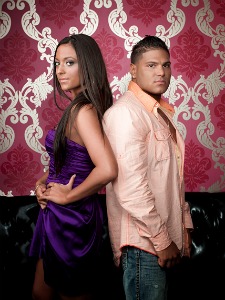 Jersey Shore‘s Ronnie Ortiz-Magro and Sammi Giancola have once again put an end to their rocky relationship, but this time around it doesn’t seem like fans of the hit reality television show will even care.

Viewers of the show have stopped counting the number of times the couple has made-up, hooked-up, and broke-up a long time ago, as their endless cycle of fights and proclamations of love have been drawn out for several seasons now.

The pair broke-up during season three of the Jersey Shore, following an explosive argument between the two lovebirds. The couple later reconciled during the filming of season four in Florence, Italy.

Ortiz-Mango made the announcement to Us Weekly magazine during Tuesday’s Paranormal Activity 3 superfan screening in New York City, stating simply “We are not together.”

Prior to season four’s premiere in August, Ortiz-Mango told Us Weekly: “Being in Italy, in such a romantic atmosphere, brought us together.”

“The first week was rough — everyone was like ‘Oh, my God.’ But [Sammi and I] didn’t fight at all in Italy. [It was] probably the highest point in our relationship,” he added.

Fellow Jersey Shore housemate Paul (Pauly D) Del Vecchio has also offered his advice to his pal, stating that he would rather see Ortiz-Mango single because Giancola is a “difficult woman.”

Now that the ex-couple has finally put their troublesome relationship to rest, at this point we ask, does anyone even still care?