Is Jessica Simpson pregnant? Sources say yes — and she wants big bucks to break the news. 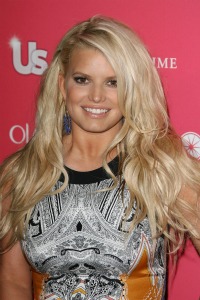 Is she or isn’t she? Everyone wants to know if Jessica Simpson is pregnant, but so far the star isn’t talking — at least, not for less than half a mil.

Sources tell the New York Post’s Page Six that the Fashion Star mentor is definitely preggers but won’t confirm the news without a lucrative magazine deal. Dad and manager Joe Simpson is shopping a deal that would include the pregnancy announcement, birth announcement and first baby photos. How much does an exclusive like that run? Page Six hears the Simpson camp wants a cool $500,000.

Meanwhile, it is getting harder and harder for Jessica Simpson to hide what looks like a growing baby bump under an array of billowing tops and dresses and behind increasingly gigantic purses.

More fuel for the fire: Despite being engaged to Eric Johnson for nearly a year, the couple still hasn’t set a wedding date. Does Simpson have cold feet or does she want until after the baby is born to walk down the aisle with a slimmed-down figure?

Lachey and Minnillo married in July. Their nuptials were broadcast in a two-hour special on TLC called Nick & Vanessa’s Dream Wedding.

So far there is no comment from Jessica Simpson’s rep.

While Carla Bruni refuses to reveal her baby’s name, Jessica Simpson wants to sell her news to the highest bidder. Tell us: Tacky or good business sense?