Giuliana Rancic at home in recovery after double lumpectomy. 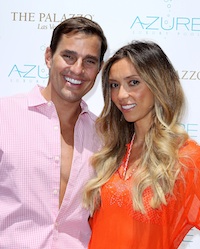 Reality television star and E! News correspondent Giuliana Rancic, 37, is at home resting after surgery on Tuesday. Giuliana just recently revealed she has early stage breast cancer on Monday, although it was discovered in August. It’s unclear why Giuliana waited to seek treatment, although it could be related to her recent IVF history.

Giuliana’s husband, Bill Rancic, spoke to The Today Show on Wednesday morning. “I’m adding nurse to my resume now. She’s having a lot of fun with that.” Bill was emotional when talking with NBC’s Ann Curry. “Watching her getting wheeled into that operating room was heartbreaking for me.” Bill went on to describe his wife’s surgery, “They had to remove a couple of lymph nodes and we’re hoping to get a report tomorrow.”

Giuliana has a follow-up appointment tomorrow and Bill feels both him and Giuliana faced a reality check after her diagnosis. “It’s funny when you go through a situation like this, it kind of turns down the volume on all the things that really aren’t important.”

According to the Mayo Clinic, a lumpectomy “saves as much of the breast as possible by removing only the tumor plus a margin of surrounding normal tissue.” A lumpectomy is “the option for most women with breast cancer.” The purpose of a lumpectomy is to evaluate the lymph nodes for possible cancerous cells.

Many speculated after Giuliana’s announcement that her early onset breast cancer was related to her attempts to get pregnant through IVF. A doctor on The Today Show refuted the connection, saying “there is no known link.”

Both Giuliana and Bill remain hopeful and positive about the future, “We are going to kick off 2012 with a new outlook on life and we’re ready to take on the world.”