Lindsay Lohan isn’t having her best week, month, or year for that matter. 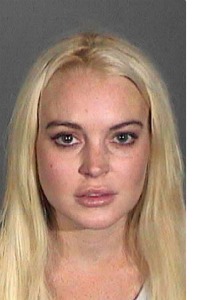 Lindsay Lohan has another mug shot to add to her wall of shame, but compared to some of her previous jailhouse photos, in this one Lohan’s looking pretty bewildered, lost and far from sober.

The erstwhile actress was grilled by Judge Stephanie Sautner in a Los Angeles courtroom on Wednesday before being handcuffed and escorted to jail for failing to complete her court-mandated community service hours.

Lohan was quickly released on a $100,000 bail, according to her rep. The former child star is due back in court on Nov. 2 for another probation hearing, where she’ll face an 18-month sentence behind bars if convicted.

The actress’ attorney, Shawn Chapman Holley, stated during Wednesday’s hearing that her client received a positive report from her psychiatrist while her rep said she “is hoping this matter will be resolved on November 2 and the Court will reinstate probation and allow her to continue fulfilling her community service.”

Meanwhile, Lohan’s estranged father, Michael Lohan commented on the state of his daughter in an interview with Jane Velez-Mitchell on her HLN show on Wednesday.

Lohan’s father suggested that his daughter check-in to a year-long rehabilitation program for her addictions. He told Velez-Mitchell, “She’s an addict, she doesn’t care and she’s in denial. She’s smoking either crack or meth, either one or the other. I’m not going to shade it.”

“I want her in a treatment program for a year. Nothing is going to change in her life. She’s going to be appearing before judges in the future if she doesn’t get help, instead of doing community service in the morgue she’s going to wind up in the morgue,” he added.

Let’s hope Lohan cleans up her act and is on the fast track to keeping sober soon. We wouldn’t want to see her father’s prediction become a reality.