Matt Damon is taking his career to the next level. The actor is ready to make his directorial debut with a new drama he co-wrote with The Office star John Krasinski. 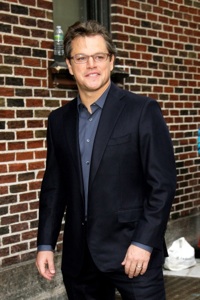 Matt Damon is following in Ben Affleck’s footsteps. The Oscar-winning screenwriter will make his directorial debut with an untitled drama for Warner Bros. Damon co-wrote the screenplay with John Krasinski, who came up with the idea for the story.

Aside from directing, Damon will also star in the film about “a salesman who arrives in a small town only to have his life changed,” according to The Hollywood Reporter. The film is said to be in the same vein as Erin Brockovich, which earned Julia Roberts a Best Actress Oscar in 2000.

Last year, Damon also set up another directorial piece at Warner Bros called Father Daughter Time: A Tale of Armed Robbery and Eskimo Kisses. It’s unclear which film the actor will shoot first, but sources say the Krasinski feature has the upper hand. Rumors indicate that production will begin in the spring.

The next 12 months will be particularly busy for Damon. He’ll have his hands full with directing, producing and acting. While prepping his untitled drama, he’s also gearing up to star opposite Michael Douglas in HBO’s Liberace biopic Behind The Candelabra.

The actor is in great company when it comes to actors-turned-directors. His fellow Good Will Hunting star and writing partner Ben Affleck has two successes under his belt with Gone Baby Gone and The Town, while frequent collaborators George Clooney, Robert Redford and Clint Eastwood have had similar success in the field.

Damon has recently starred in the Steven Soderbergh thriller Contagion and The Adjustment Bureau, which co-starred Krasinski’s wife Emily Blunt.